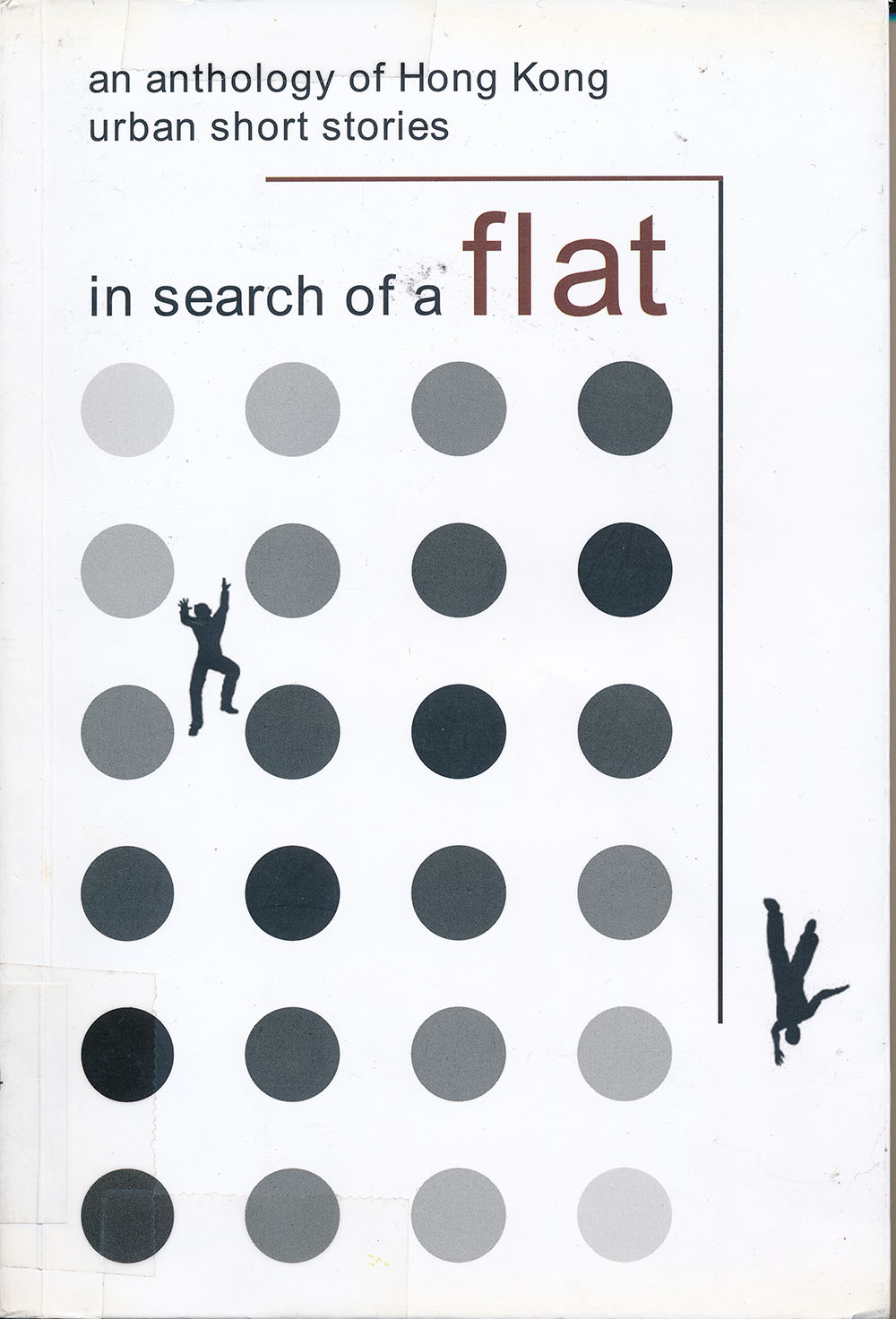 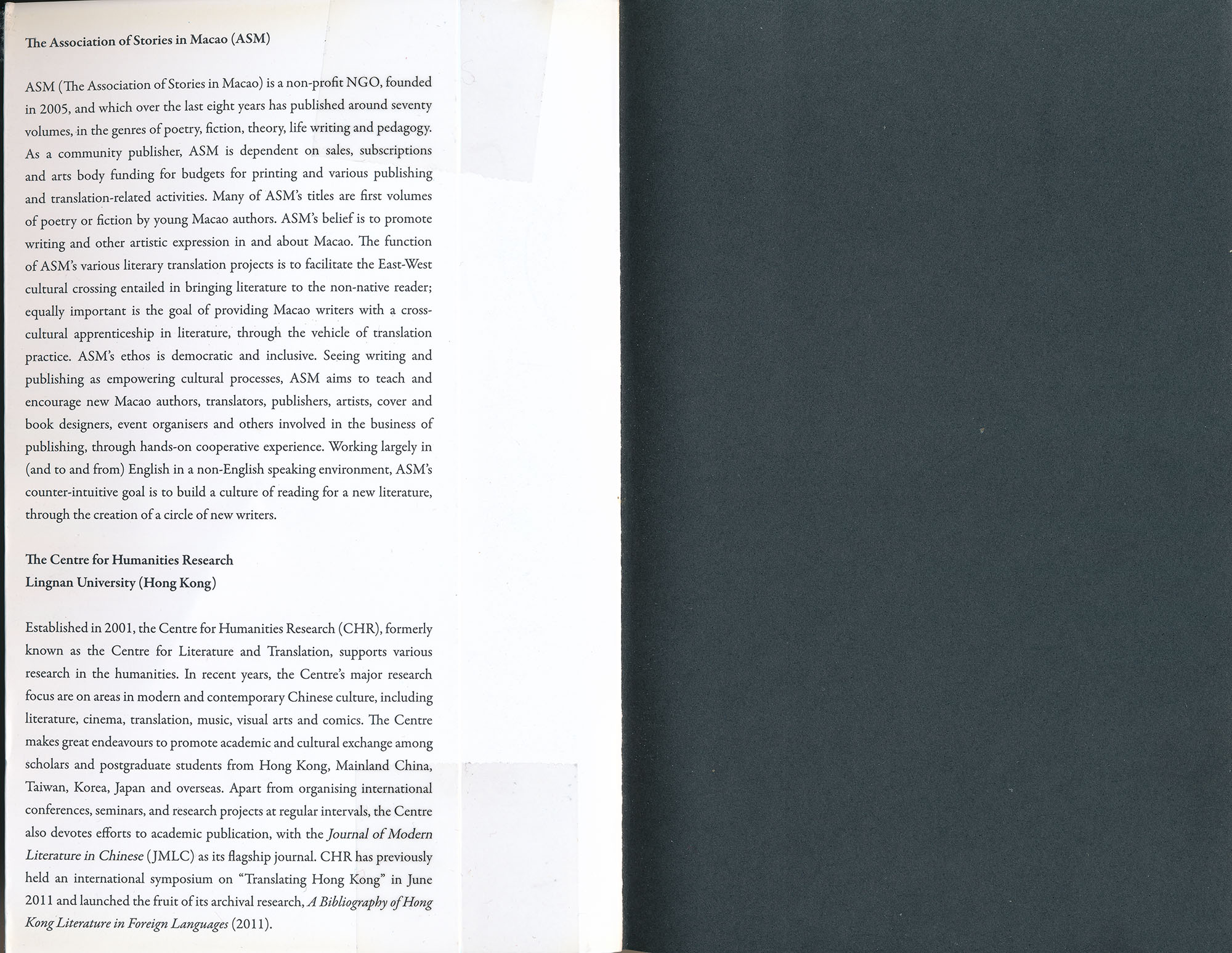 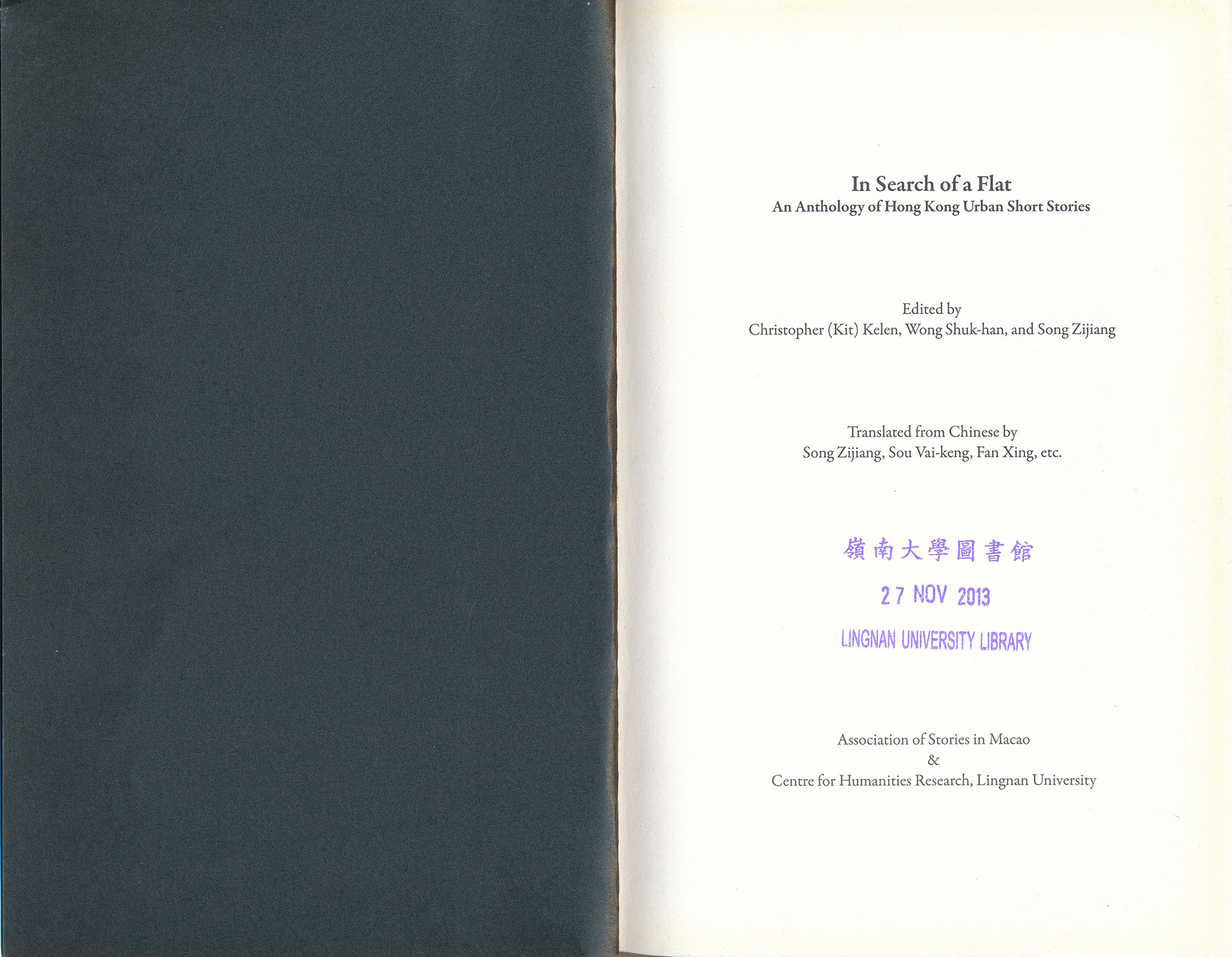 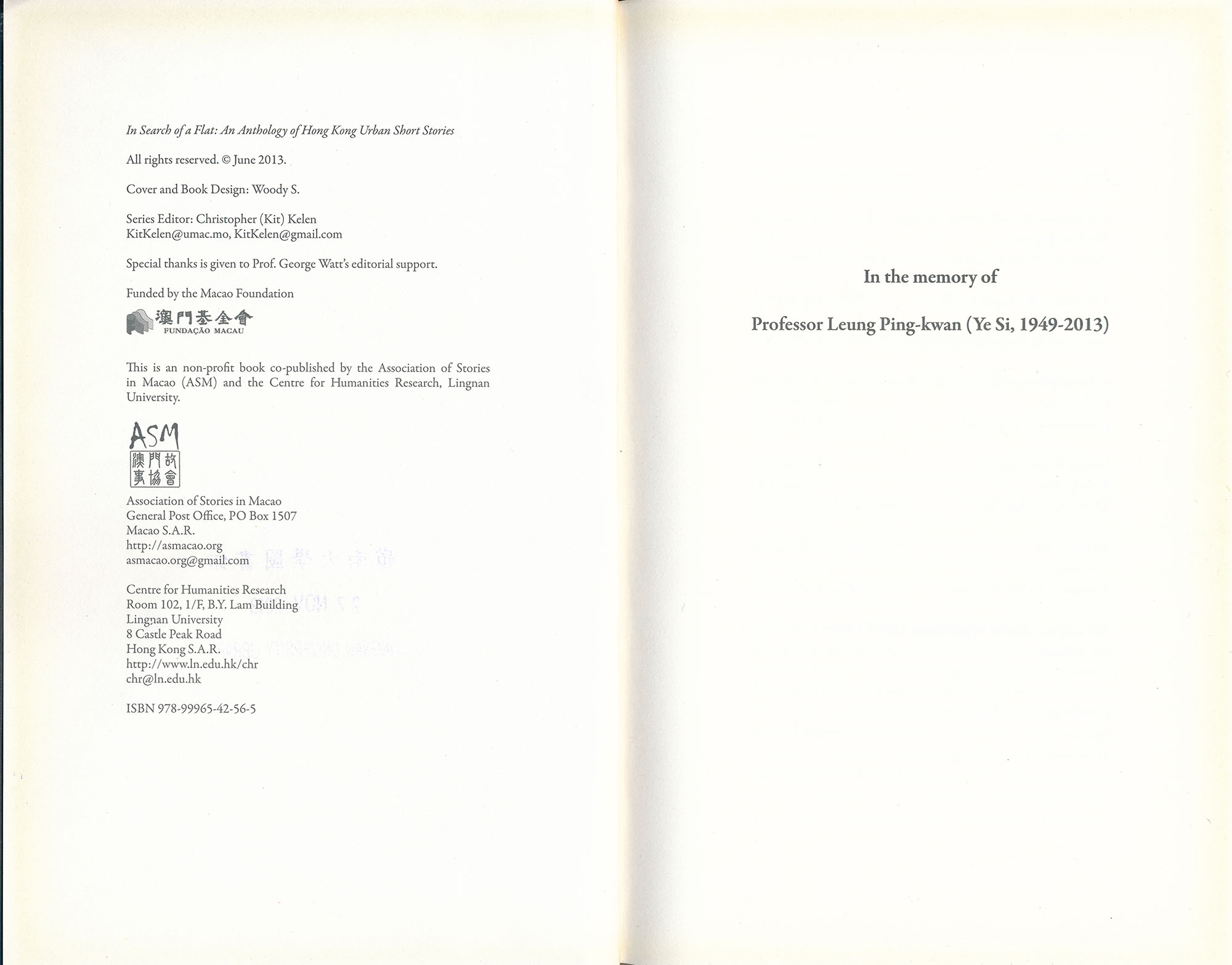 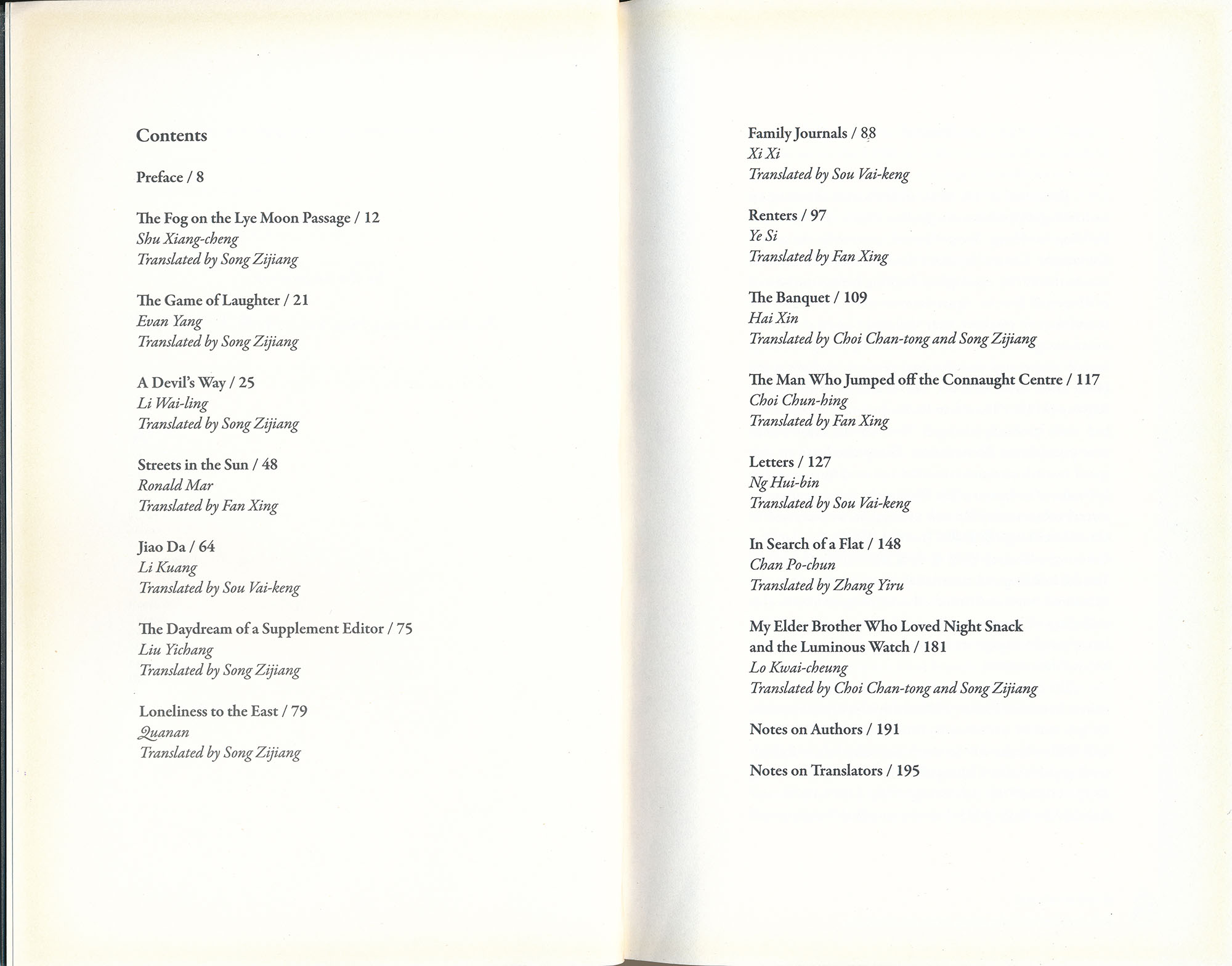 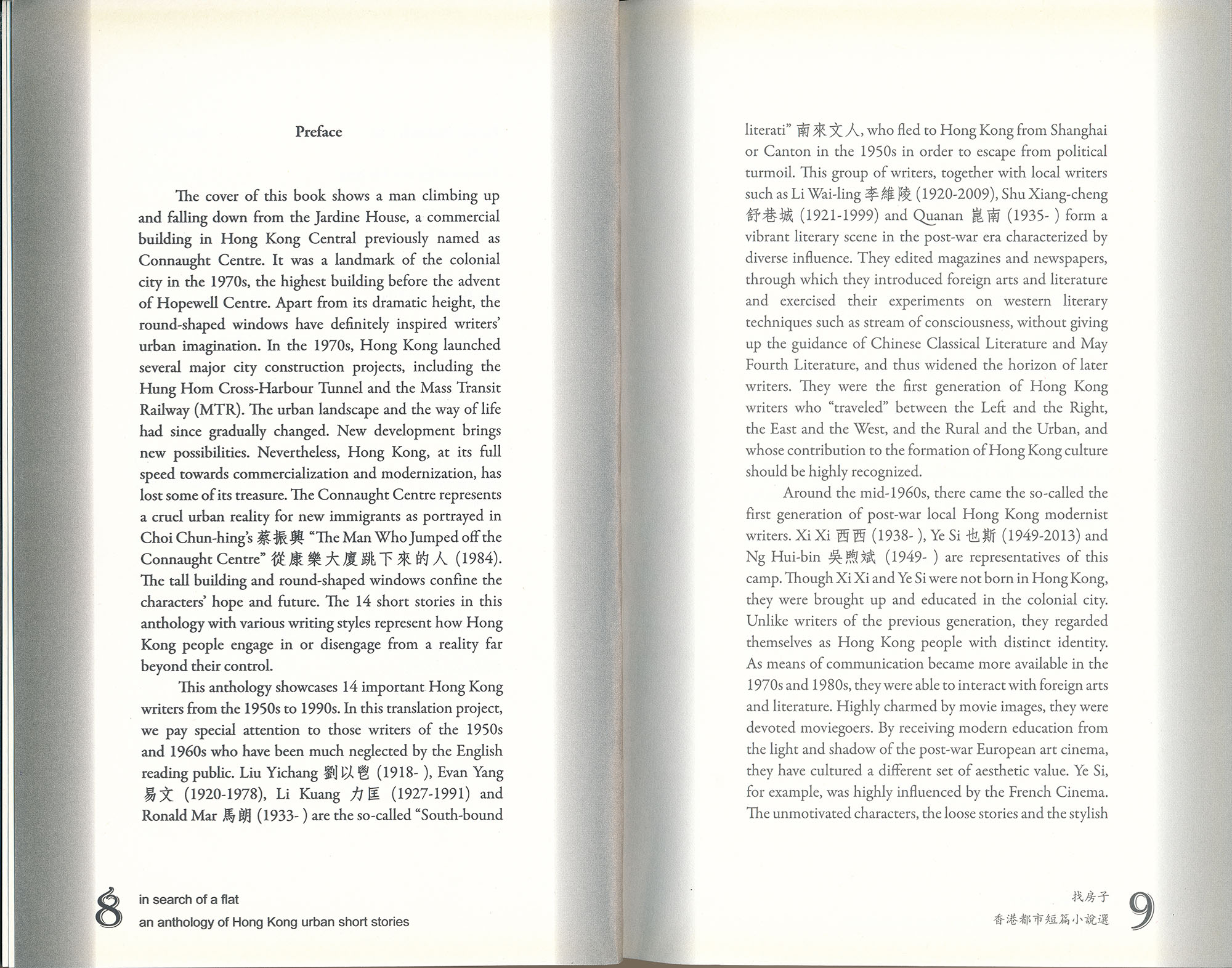 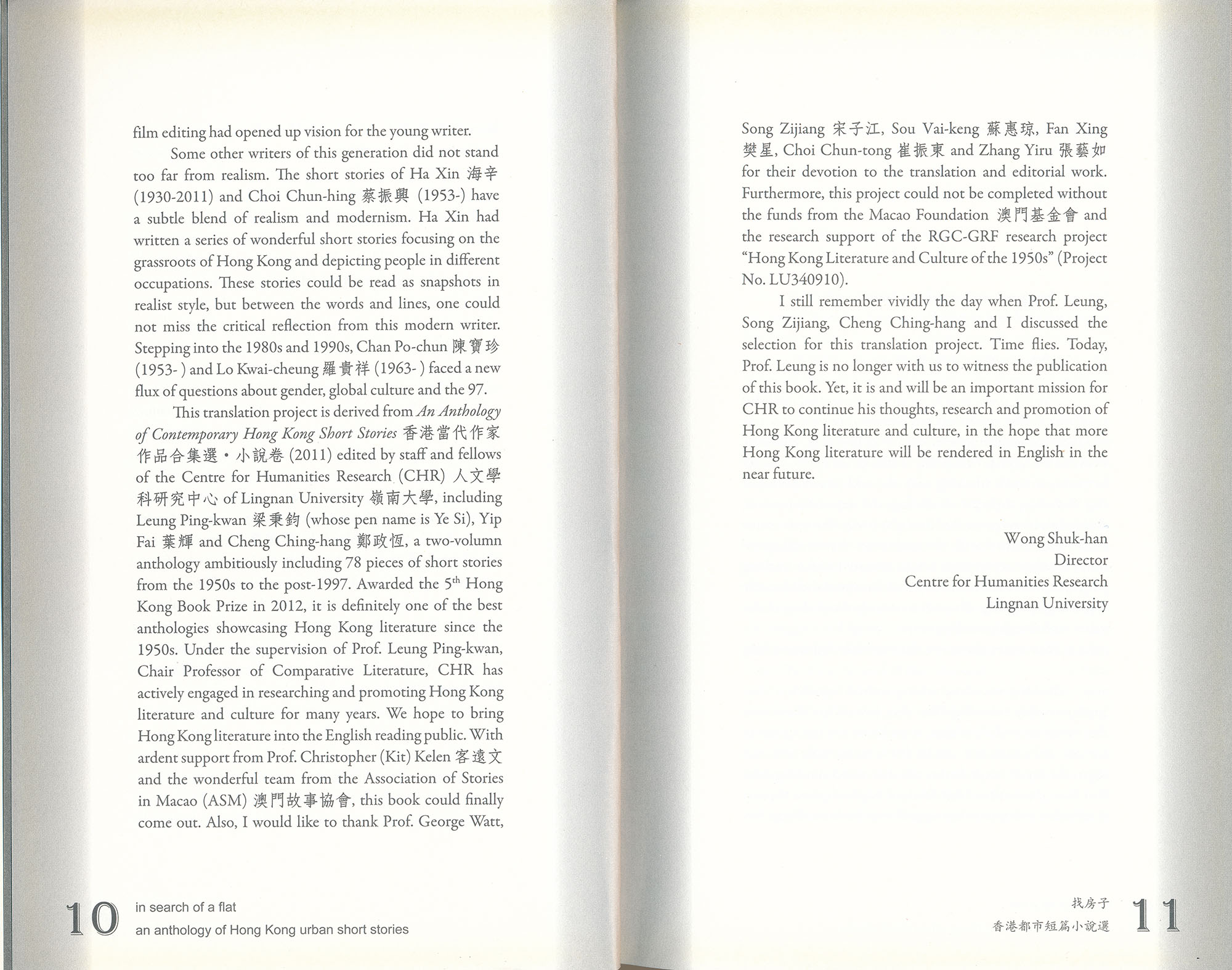 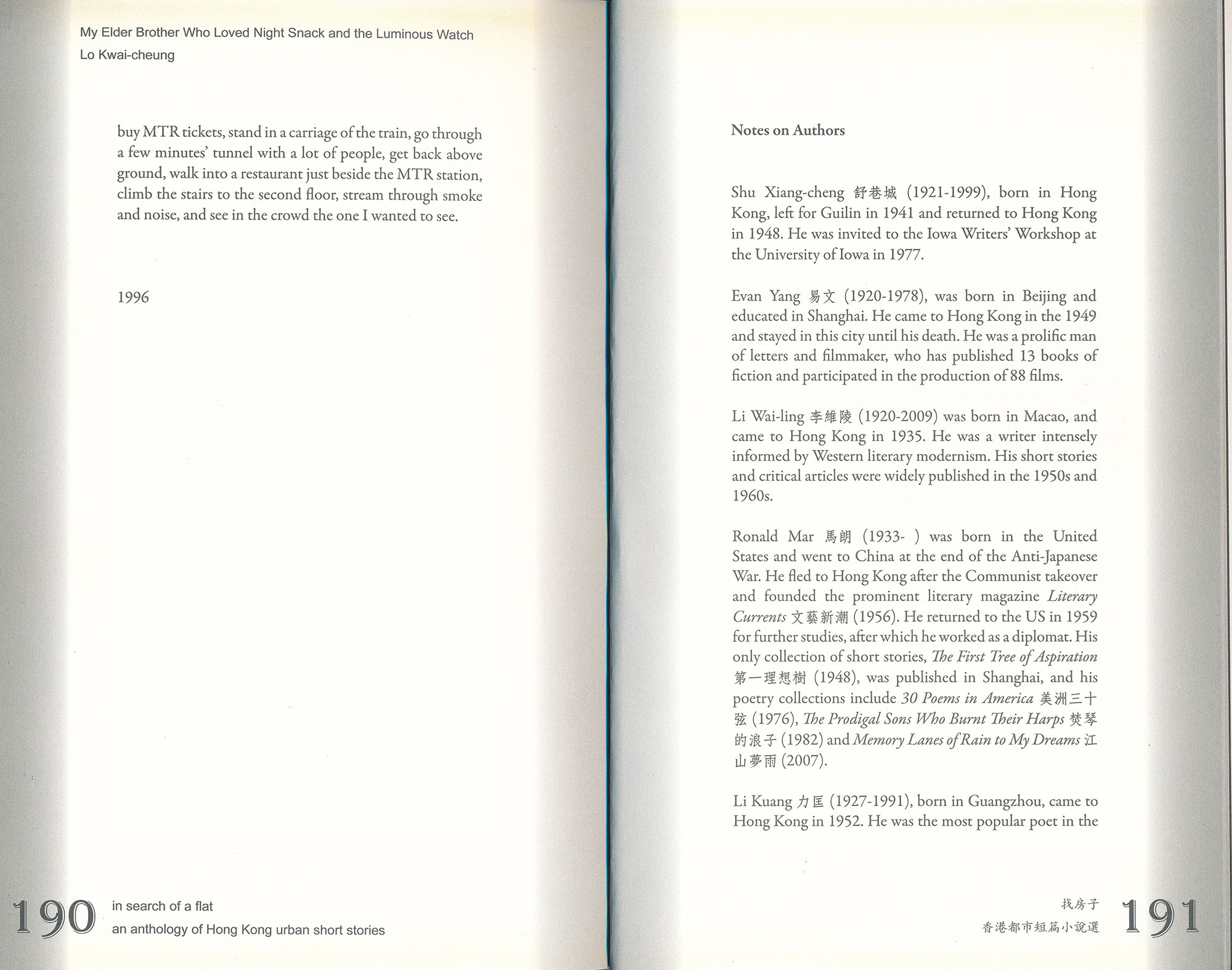 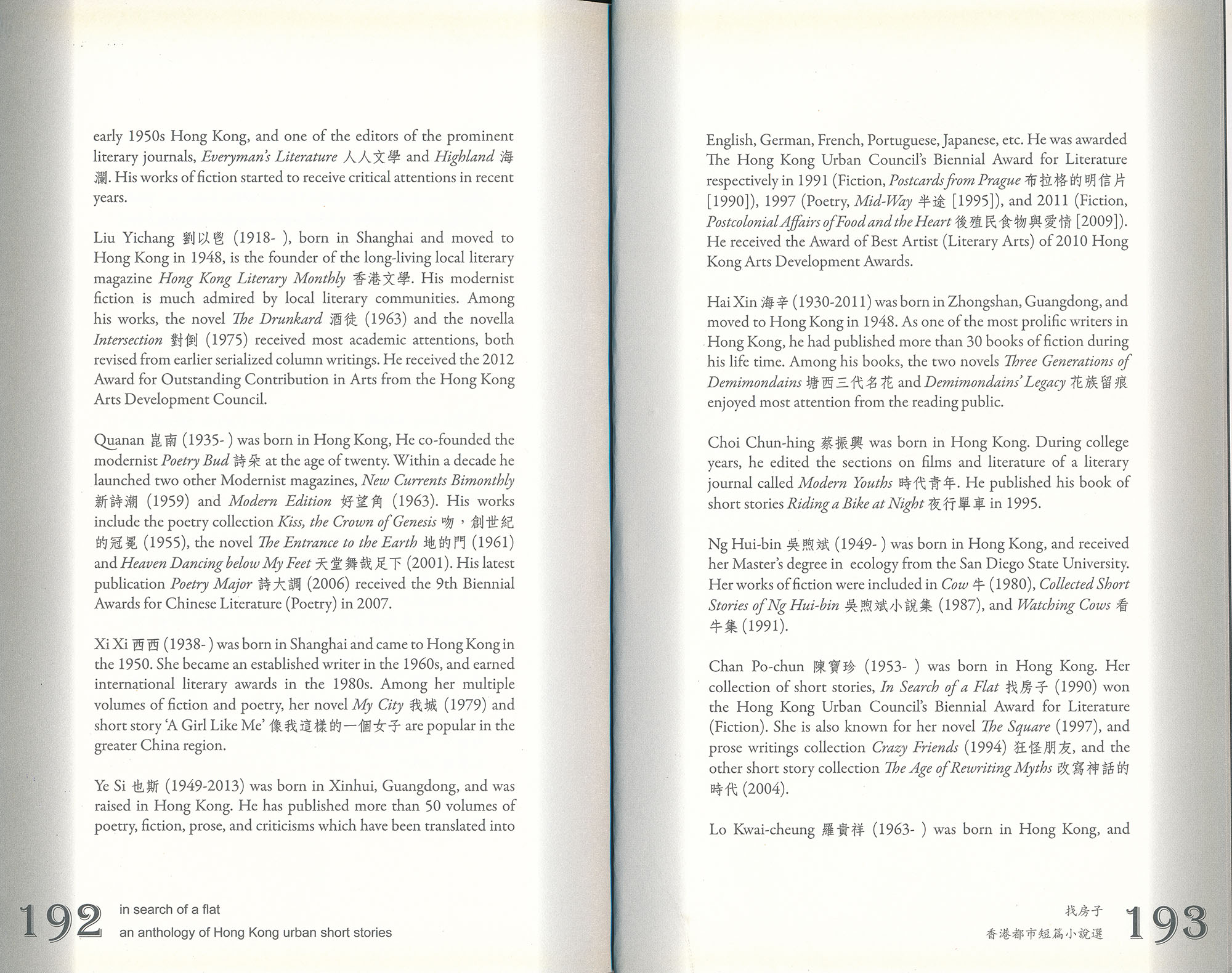 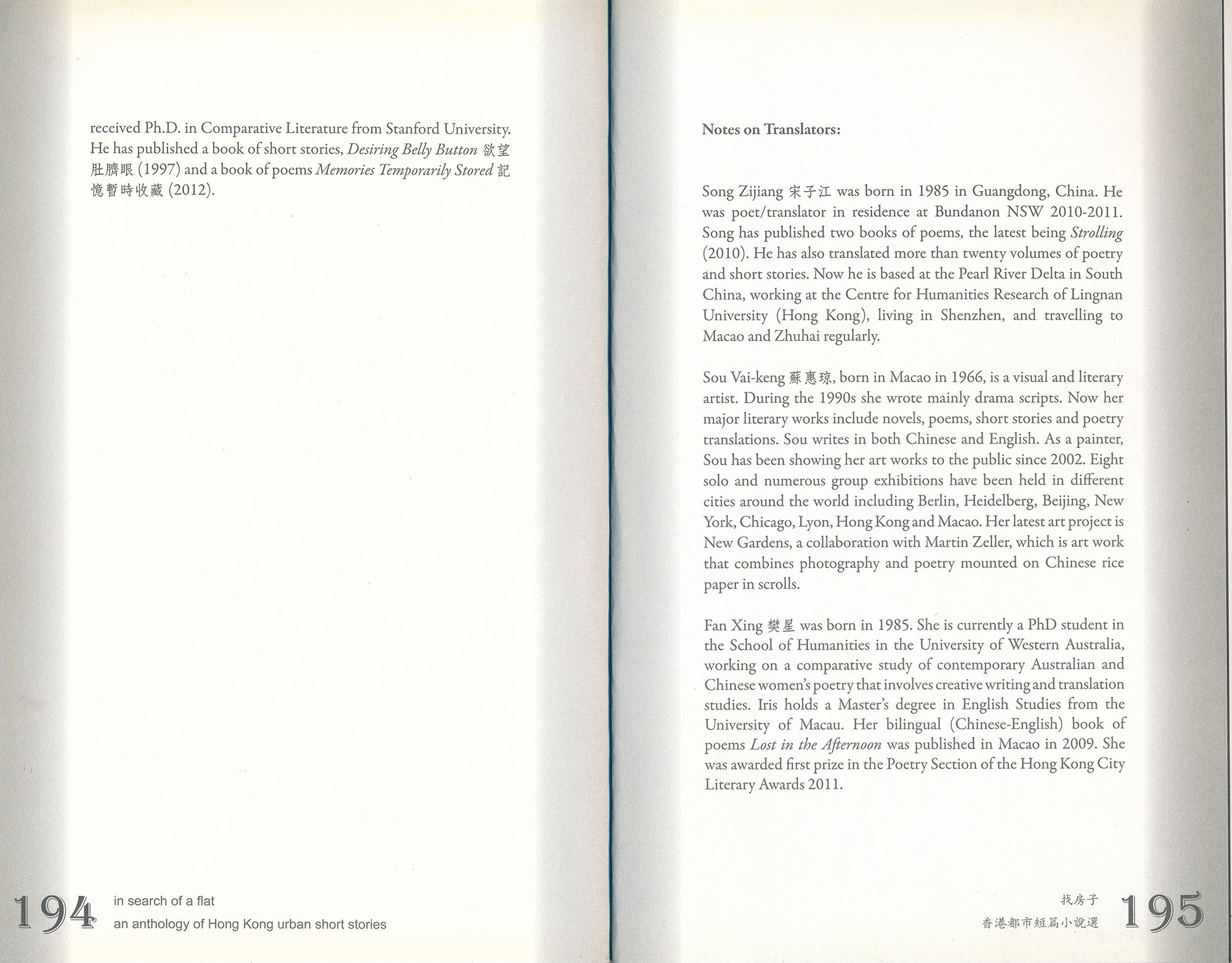 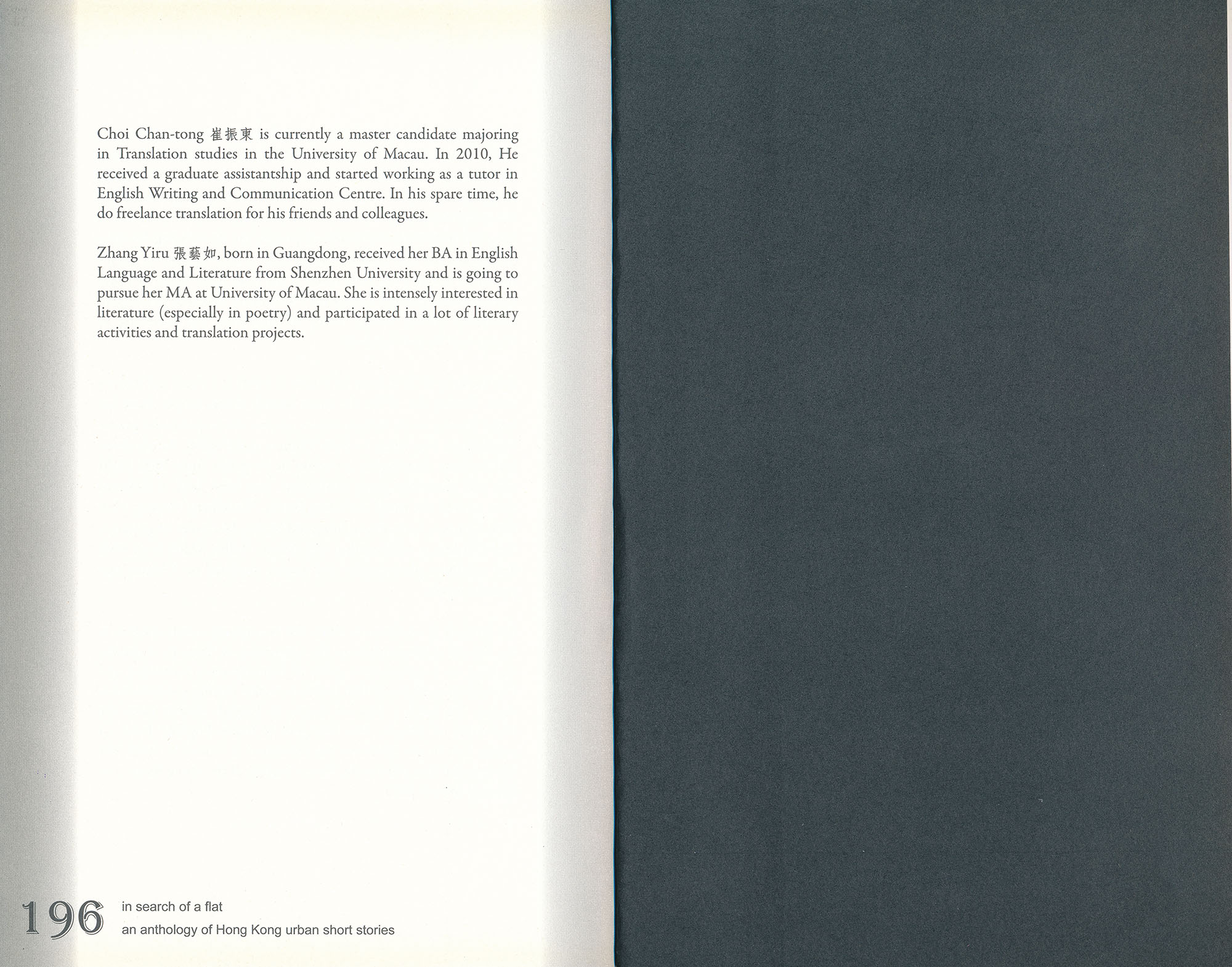 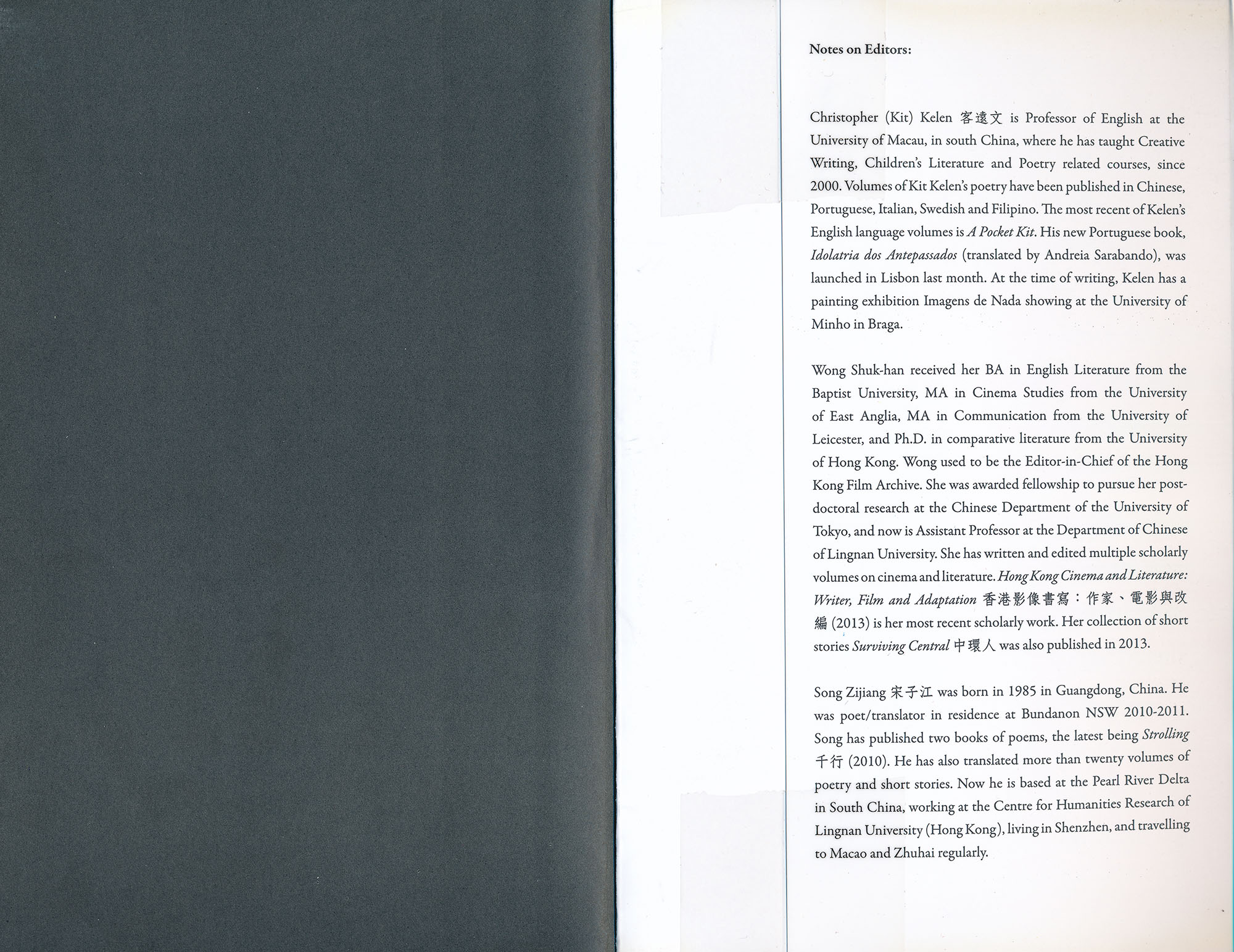 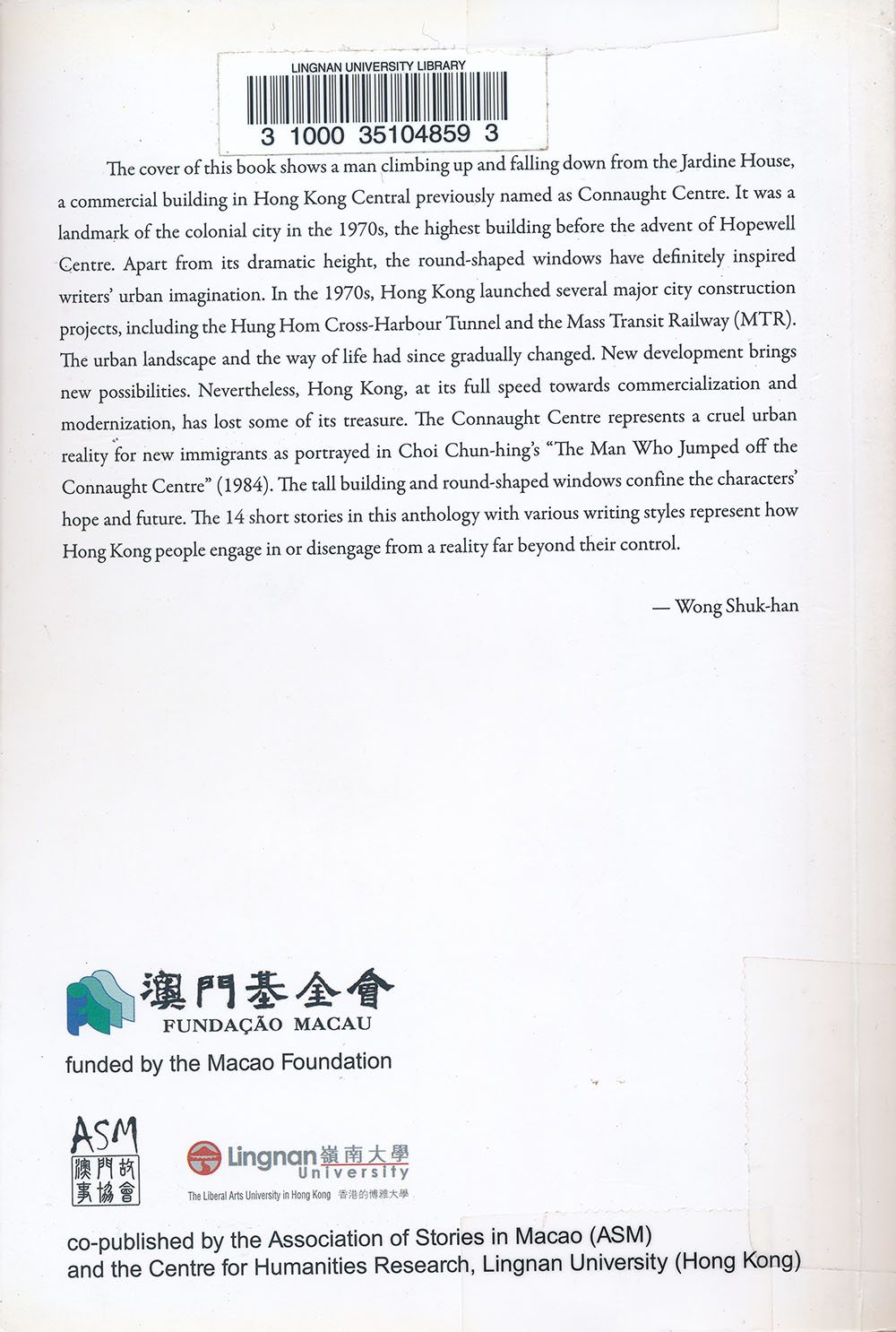 Title:
Family Journals
Genre:
Fiction
Book Title:
In Search of a Flat: An Anthology of Hong Kong Urban Short Stories
Page Numbers:
88 - 96
First Publication Date:
2013
Publisher:
Association of Stories in Macao ; Centre for Humanities Research, Lingnan University
Language:
Monolingual (English)
Synopsis:
In "Family Journal", the author utilised a cinematic approach to deal with the balance of work and family of modern women from multiple angles. Modern brushwork is implemented in deep interpersonal feelings. Although the female characters try to defy their fate, they have failed and they have to suffered from pain without speaking up.

Name:
ZHANG, Yan 張彥
Alternate Name:
張愛倫 ; 西西 ; Cheung Oi Lun ; Xi Xi ; Hsi Hsi
Year of Birth:
1938
Birthplace:
Shanghai, China
Gender:
Female
Biography:
Born in China in 1938, Zhang came to Hong Kong at the age of twelve. She began to write for local newspapers and magazines when she was in secondary school. After receiving her Diploma of Education, she taught at a primary school and worked as an editor for several literary magazines. She also co-founded the non-profit publishing house Su Yeh Publications with her friends. Her best-known publications include 《我城》(My City) and 《浮城誌異》(Marvels of the Floating City), which depicted Hong Kong’s local life and social issues.
Link to biography:
https://www.cuhk.edu.hk/rct/renditions/authors/xixi.html

Name:
SOU, Vai-keng 蘇惠琼
Gender:
Female
Translator Biography:
Born in Macao in 1966, Sou is a visual and literary artist, who writes in both Chinese and English. During the 1990s, she wrote mainly drama scripts. Now her major literary works include novels, poems, short stories and poetry translation. As a painter, she has been showing her art works since 2002. One of her recent art project is New Gardens, a collaboration with Martin Zeller. The project combines photography and poetry mounted on Chinese rice paper in scrolls.