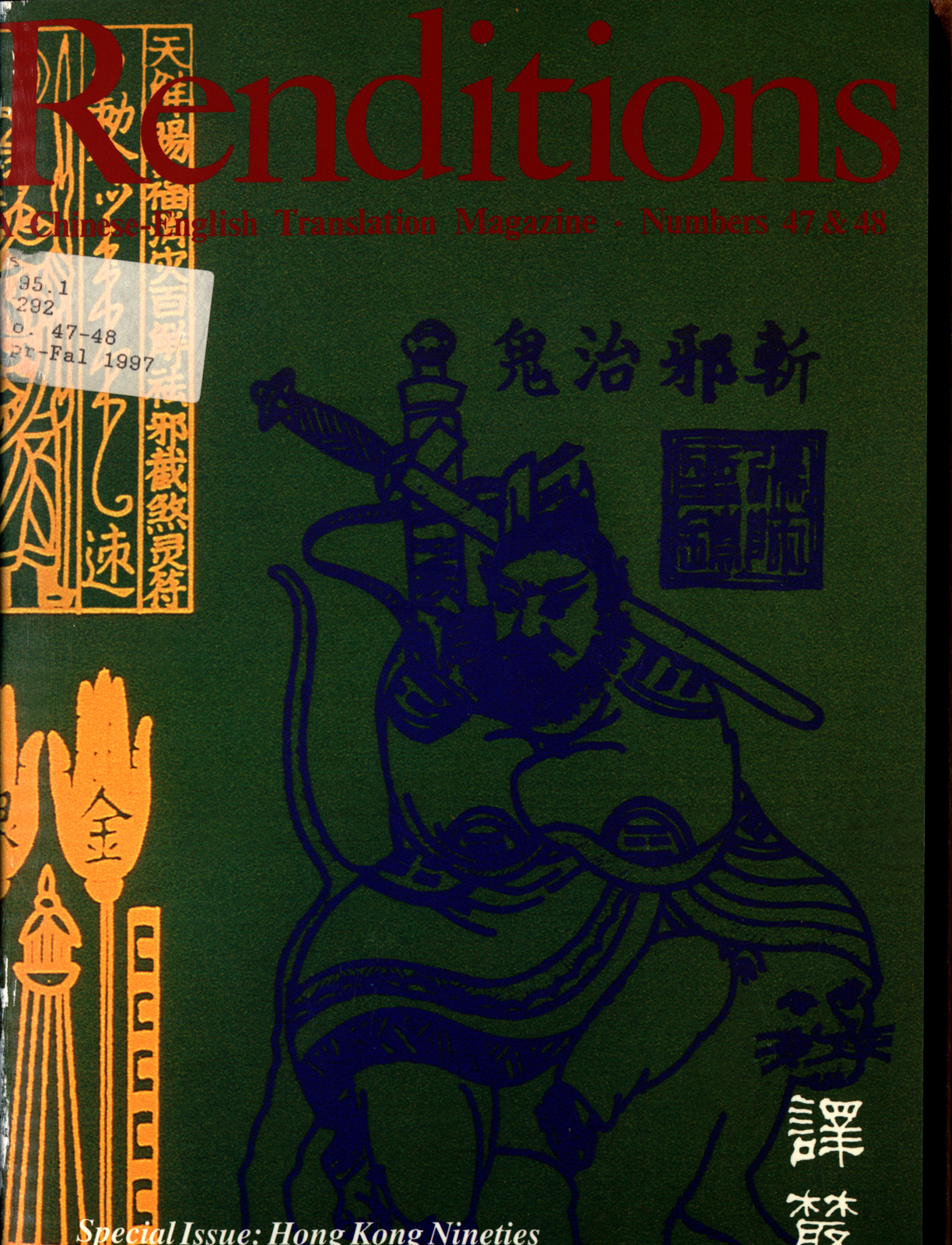 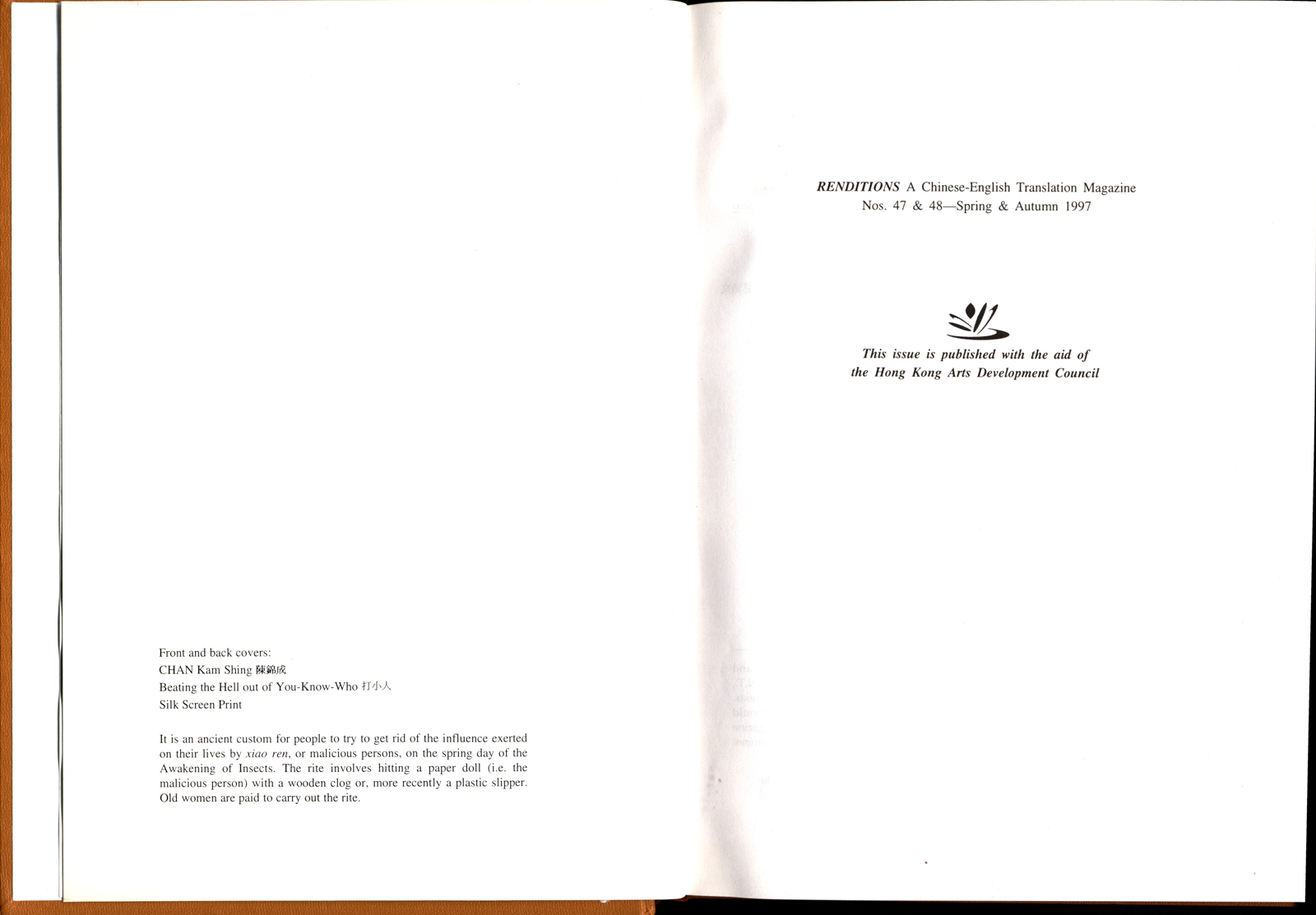 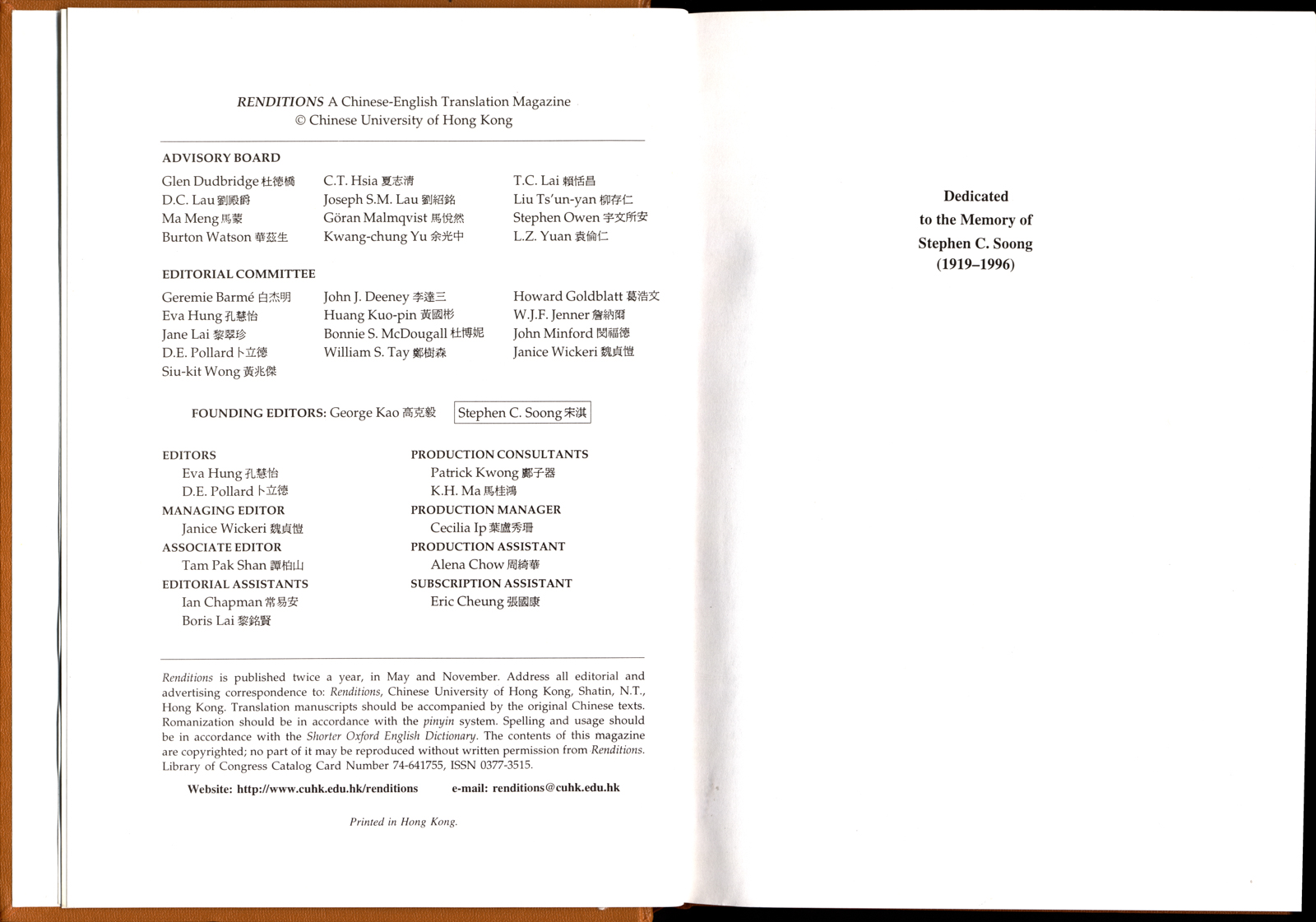 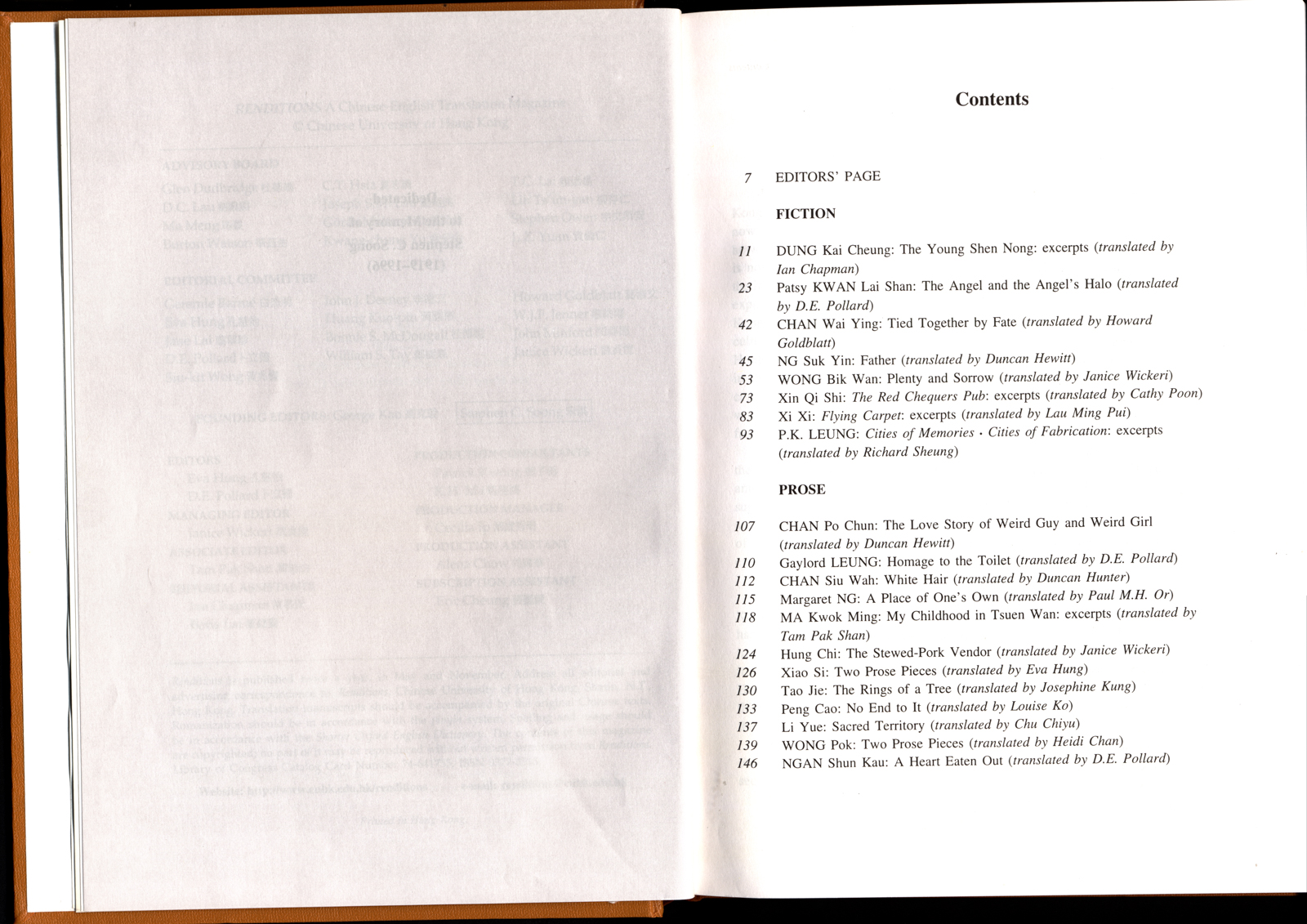 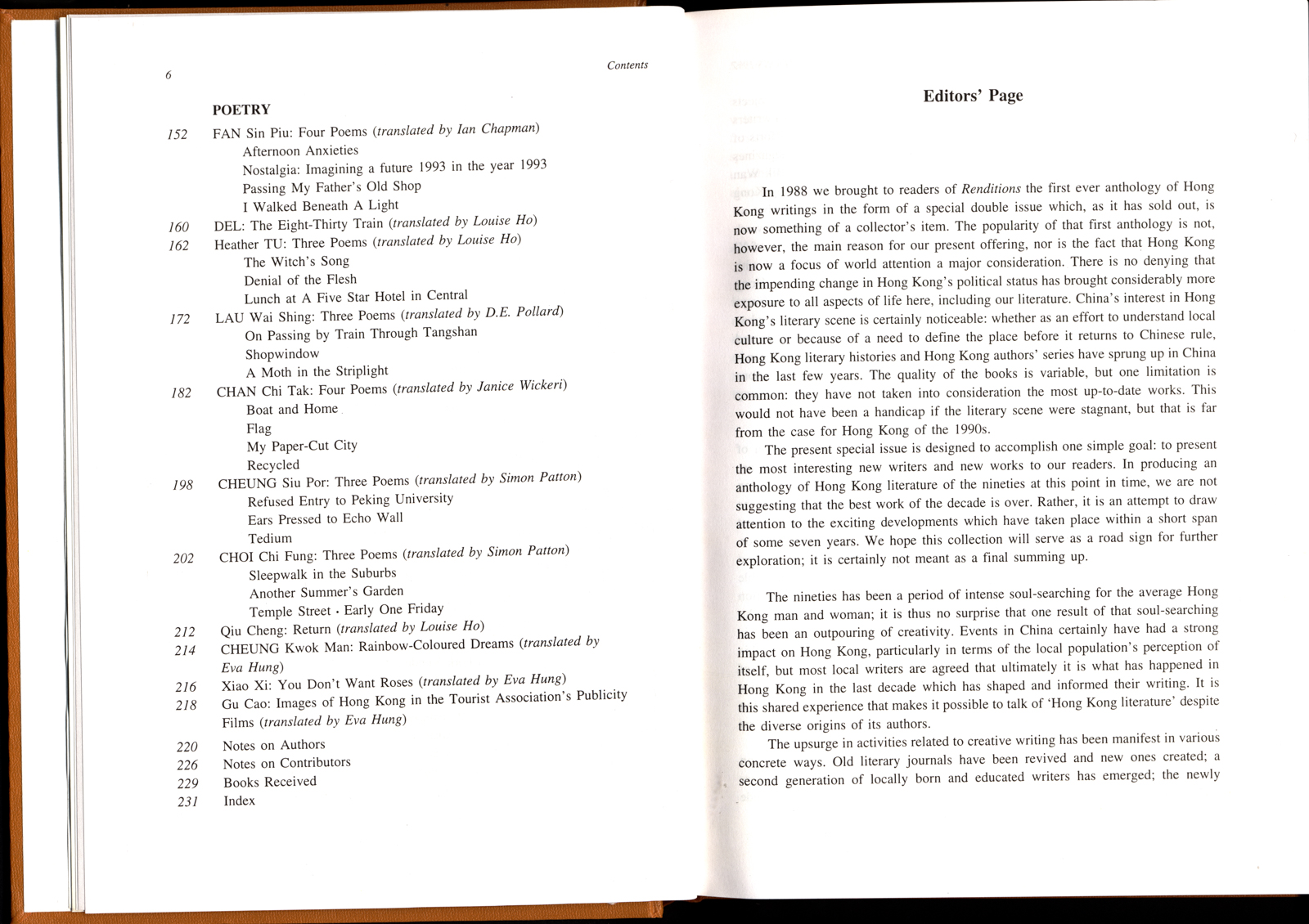 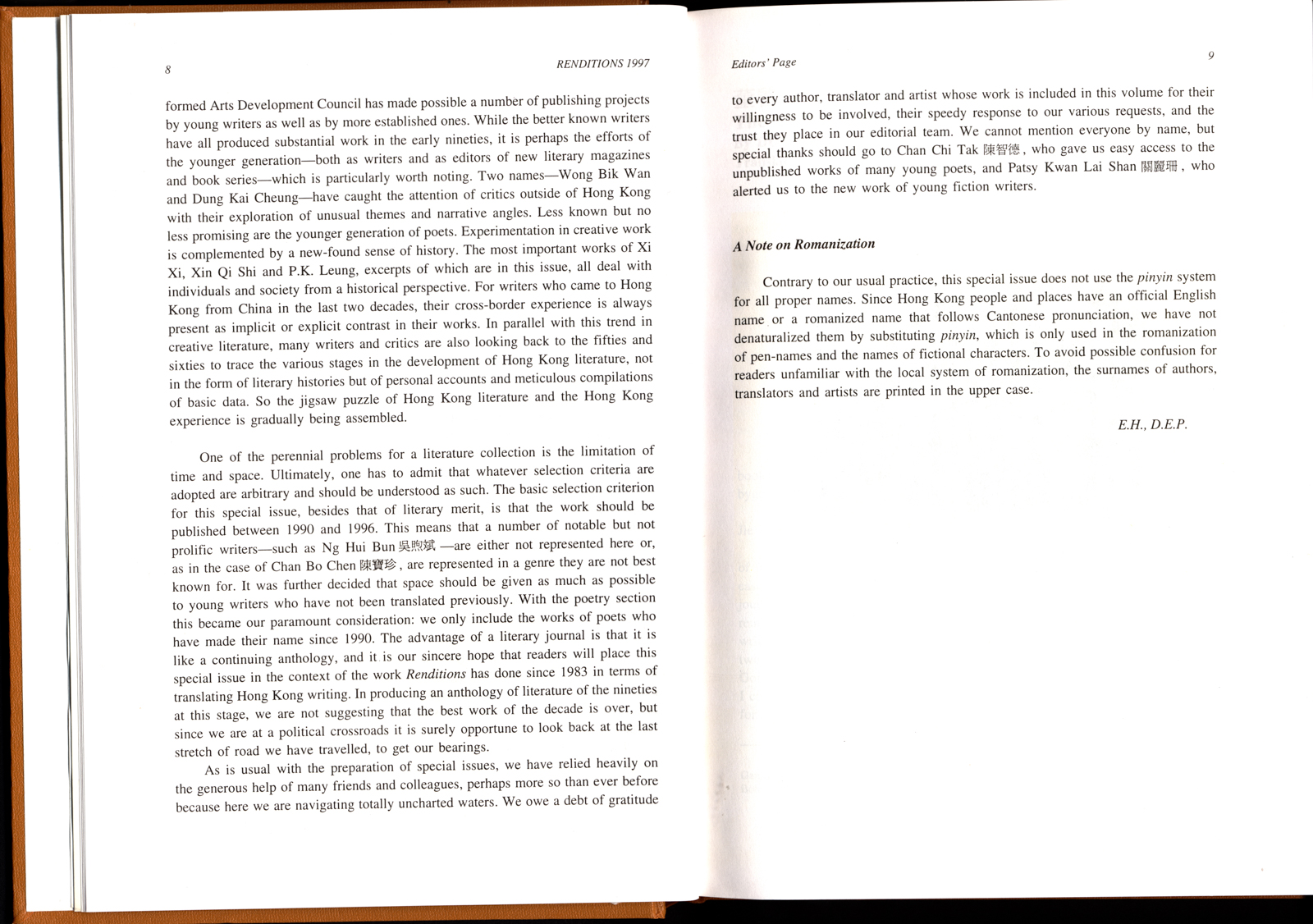 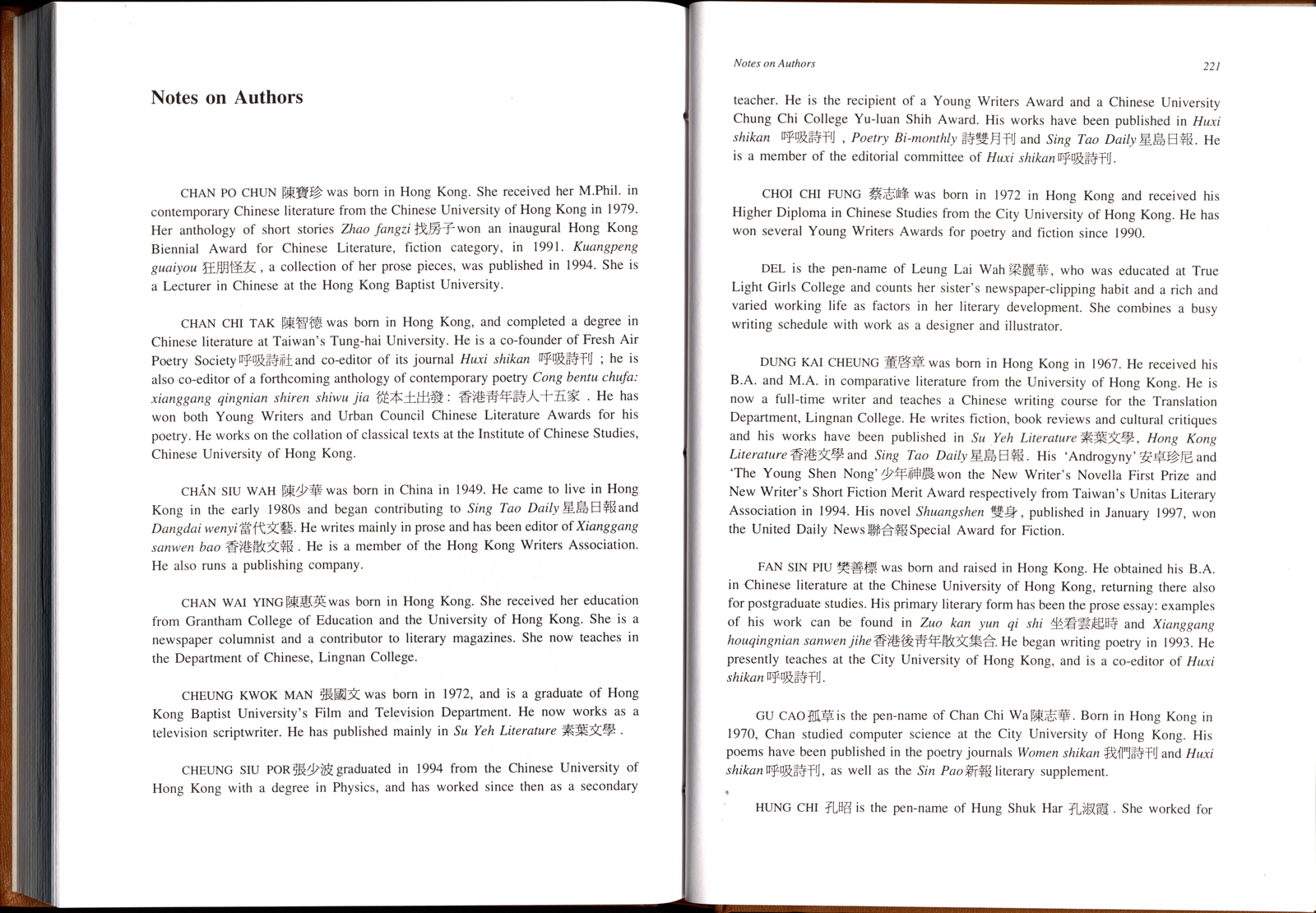 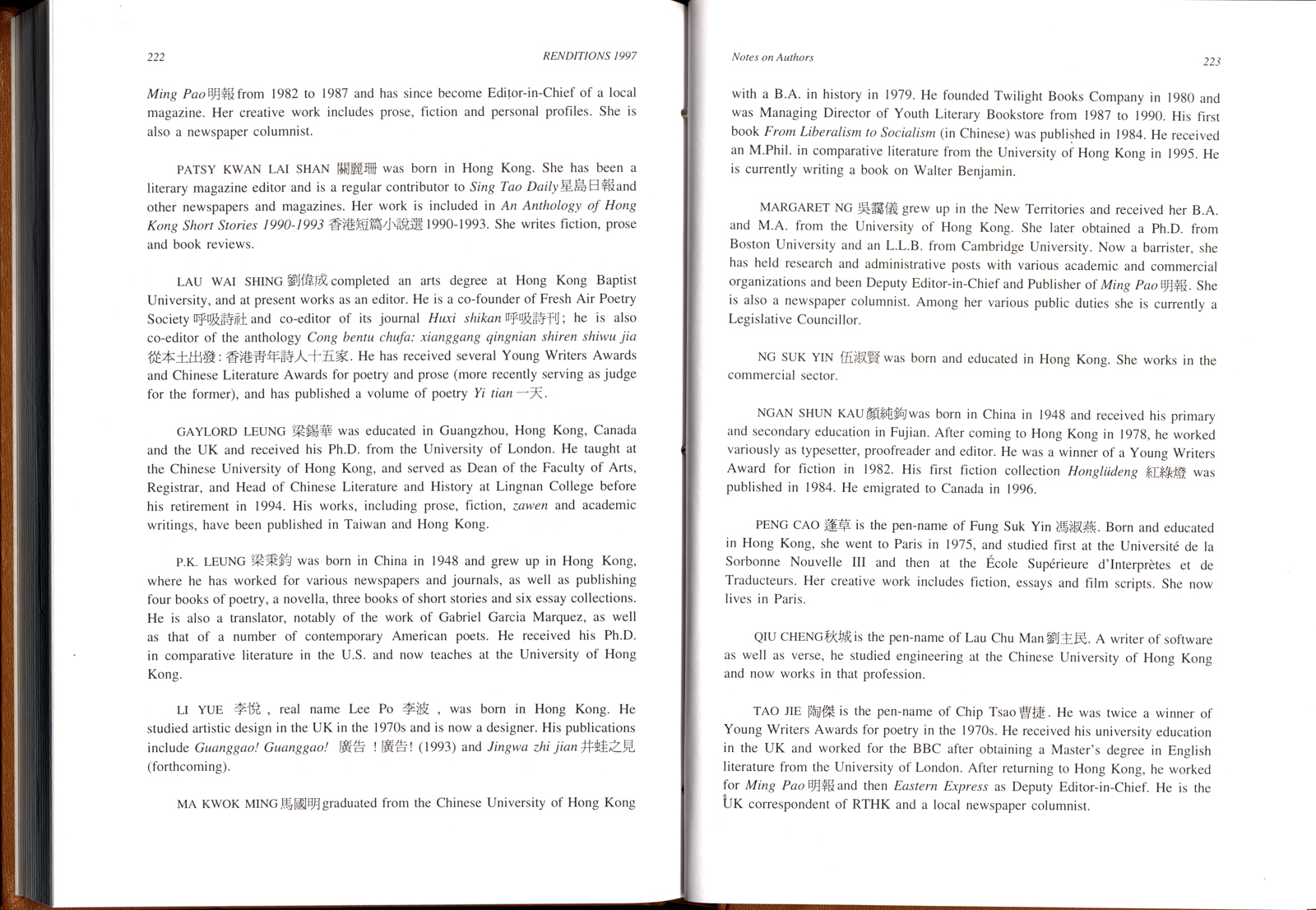 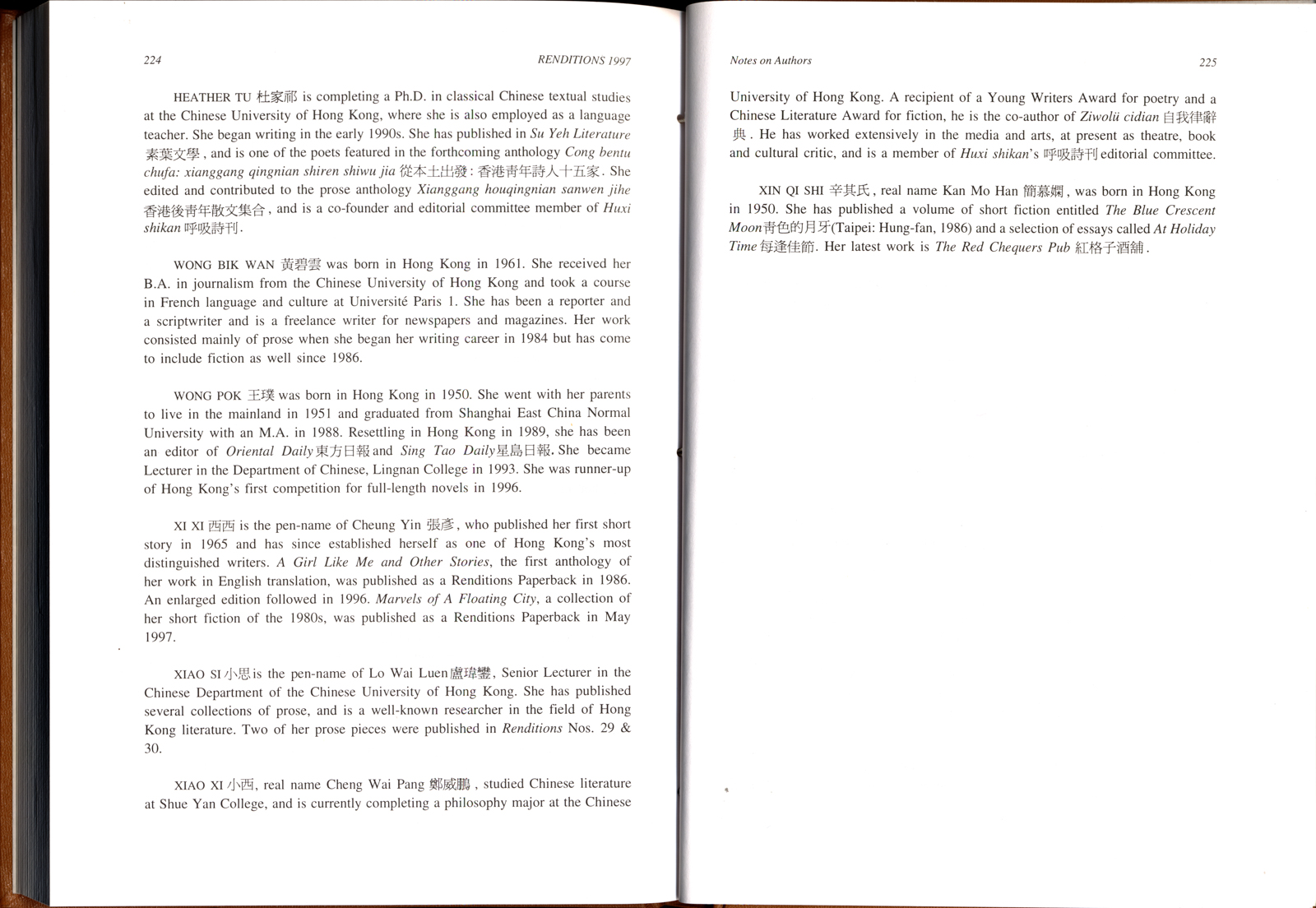 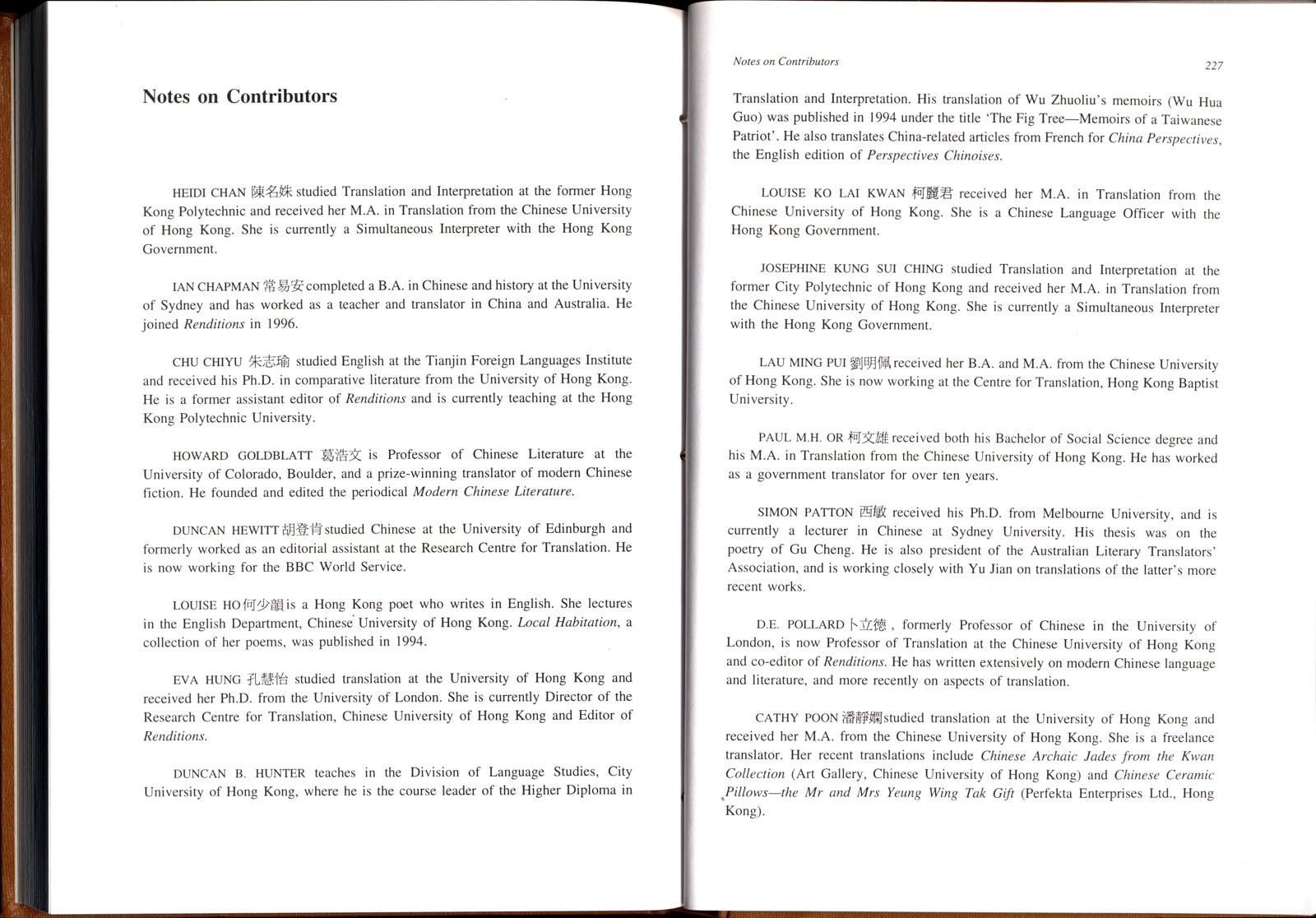 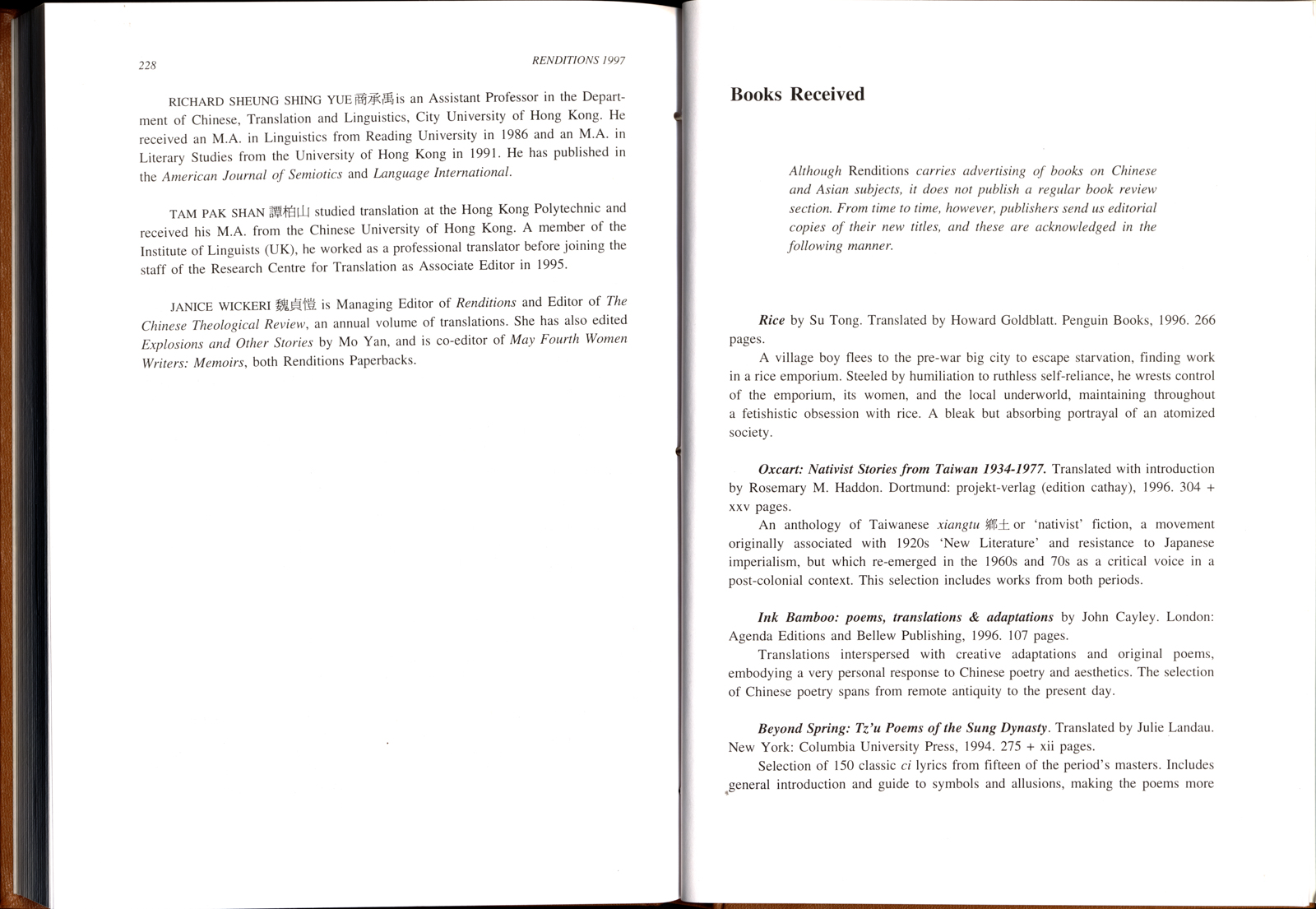 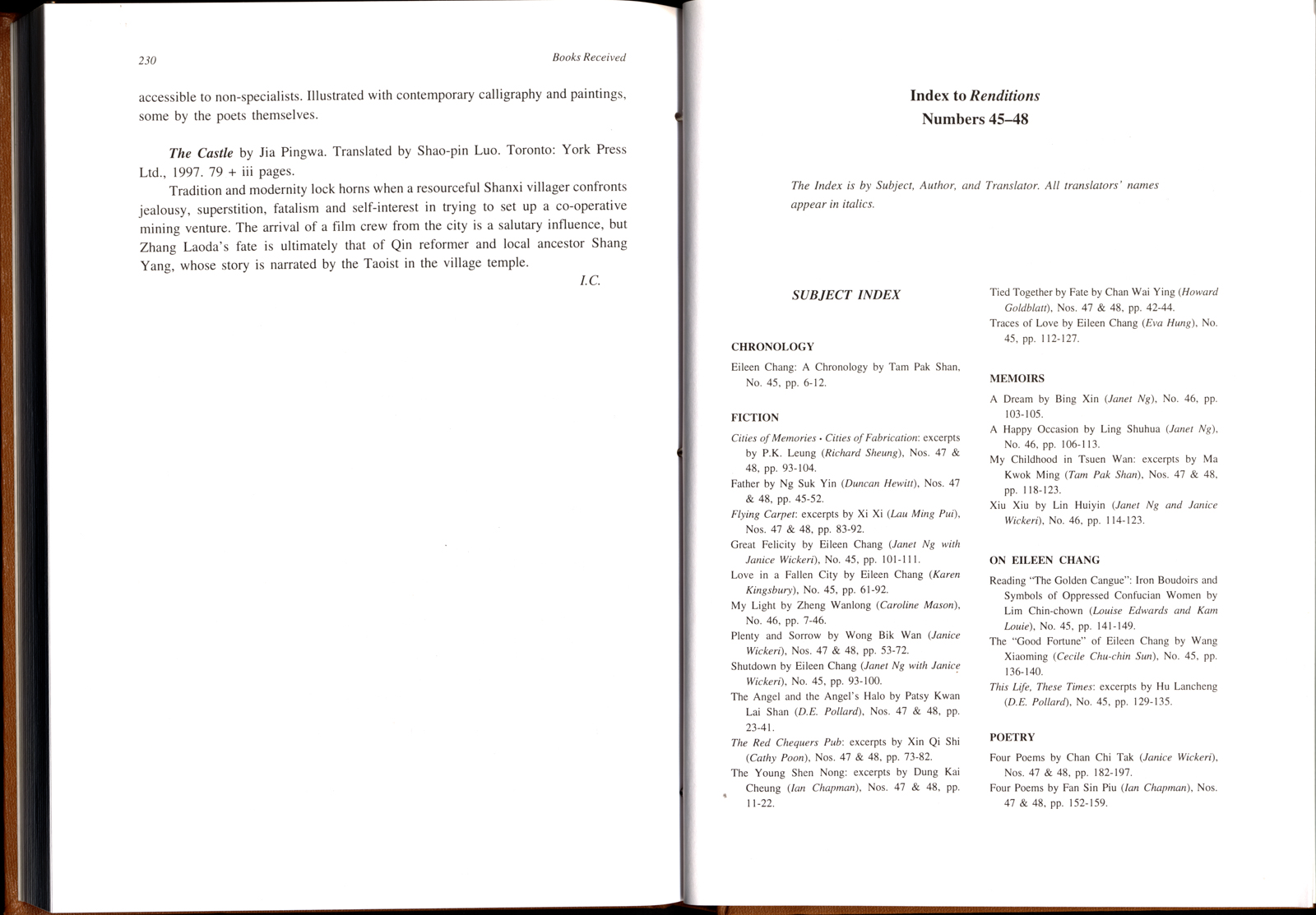 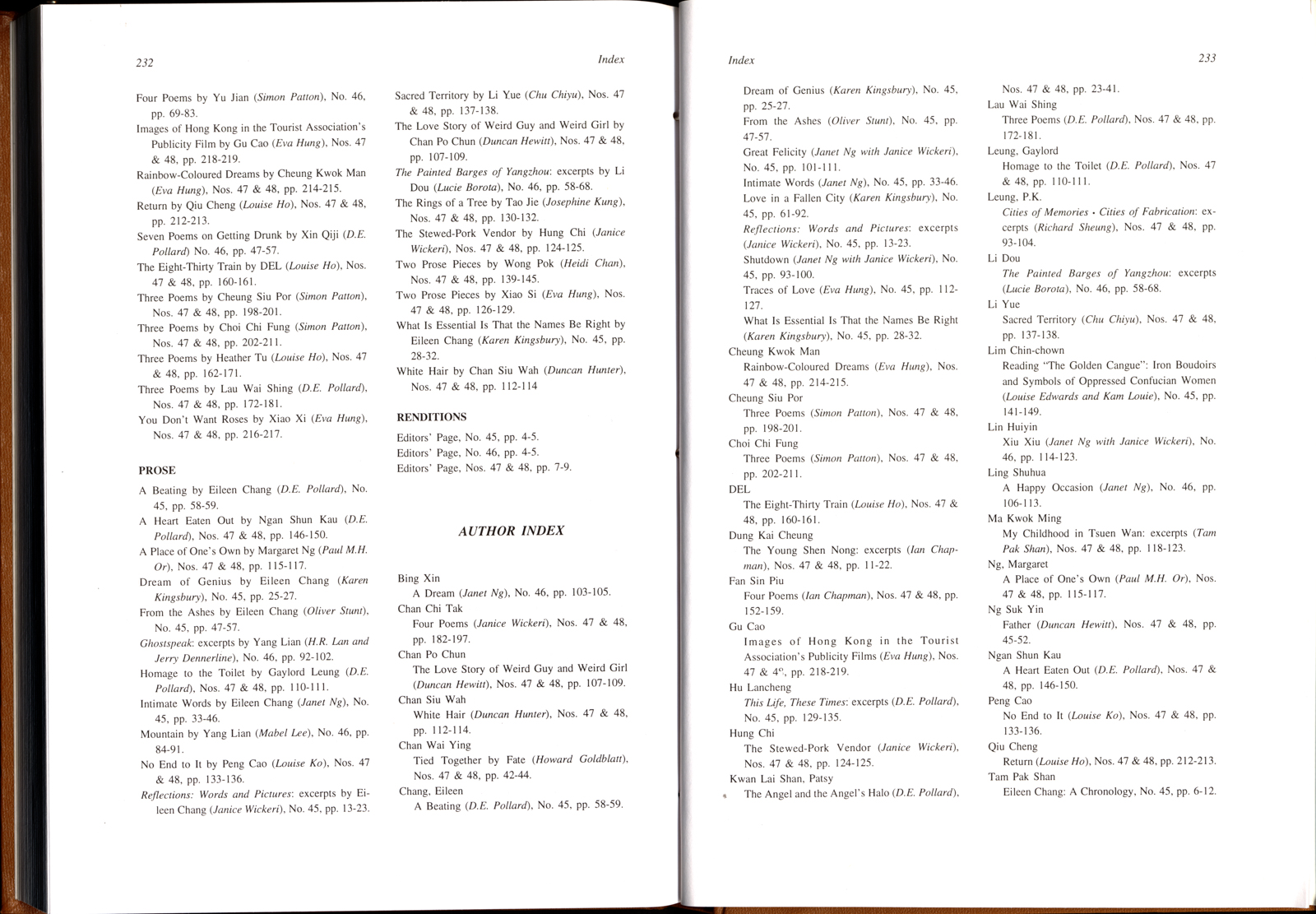 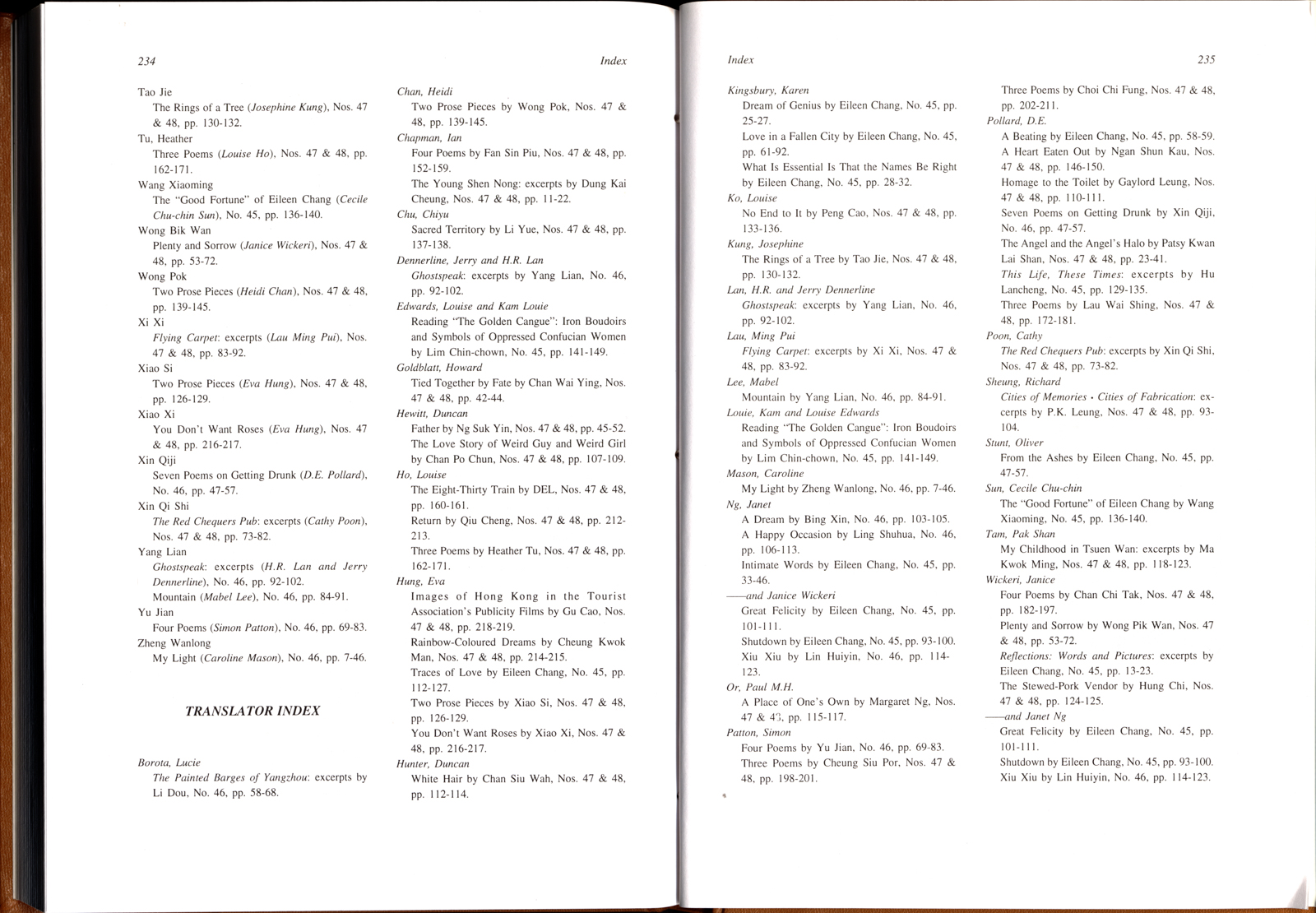 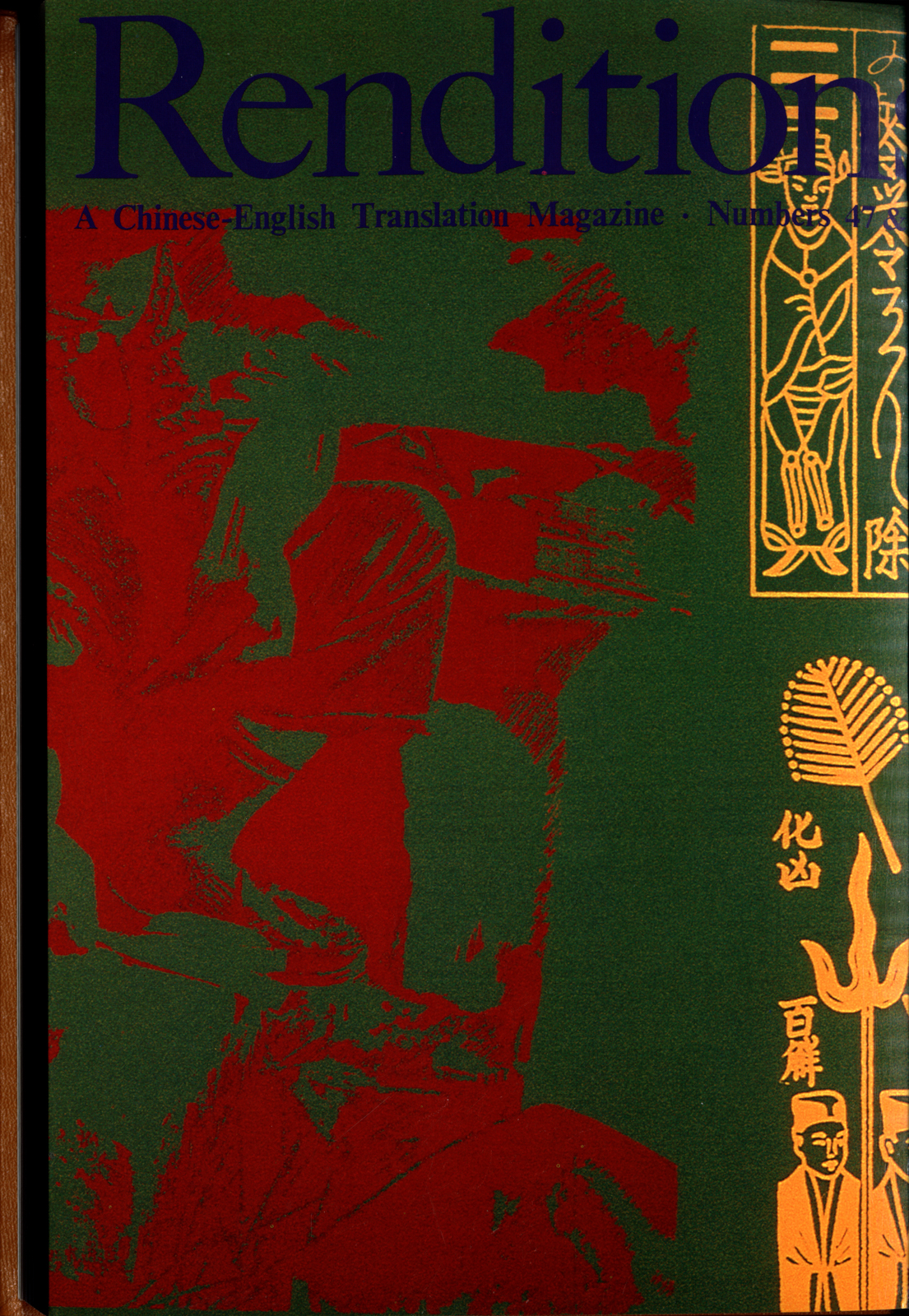 Title:
Feather Dusters
Genre:
Fiction
Book Title:
Renditions, nos. 47 & 48 (Spring & Autumn 1997), Special Issue on Hong Kong Nineties
Page Numbers:
86 - 88
First Publication Date:
1997
Publisher:
Research Centre for Translation, the Chinese University of Hong Kong
Language:
Monolingual (English) (Occasionally Bilingual (Chinese-English))
Synopsis:
The story is about the relationship between a woman and a weird guy, who perceives his girlfriend as his own possession - she cannot go out after work, she must let him know every one of her moves, and she cannot even accept a promotion just because the weird guy himself has never been promoted. As time goes on, the girl starts to think that that is what a relationship is supposed to be like and she becomes a “weird” person thinking it is an enjoyment.
Link to Work:
http://www.cuhk.edu.hk/rct/pdf/e_outputs/b4748/v47&48p083.pdf
Link to HKBU Library:
https://library.hkbu.edu.hk/record/?ID=HKBU_IZ21319515210003409&T=L

Name:
ZHANG, Yan 張彥
Alternate Name:
張愛倫 ; 西西 ; CHEUNG, Oi Lun ; Xi Xi ; Hsi Hsi
Year of Birth:
1940
Birthplace:
Shanghai, China
Gender:
Female
Biography:
Born in China in 1938, Zhang came to Hong Kong at the age of twelve. She began to write for local newspapers and magazines when she was in secondary school. After receiving her Diploma of Education, she taught at a primary school and worked as an editor for several literary magazines. She also co-founded the non-profit publishing house Su Yeh Publications with her friends. Her best-known publications include 《我城》(My City) and 《浮城誌異》(Marvels of the Floating City), which depicted Hong Kong’s local life and social issues.
Link to biography:
https://www.cuhk.edu.hk/rct/renditions/authors/xixi.html

Name:
LAU, Ming Pui 劉明佩
Gender:
Female
Translator Biography:
Lau received her BA and MA from the Chinese University of Hong Kong. She was working at the Centre for Translation, Hong Kong Baptist University when she translated Flying Carpet.

Name:
HUNG, Eva 孔慧怡
Birthplace:
Hong Kong
Editor Biography:
Born in Hong Kong, Hung received her doctorate at the University of London. She was the Director of the Research Centre for Translation at The Chinese University of Hong Kong and editor of the literary journal Renditions. She has translated works by Wang Anyi and Eileen Chang into English.
Link to Editor biography:
https://hk.lifestyle.appledaily.com/lifestyle/columnist/daily/article/20171020/20188139

Name:
POLLARD, David 卜立德
Birthplace:
England
Editor Biography:
Pollard served as Professor of Chinese at the University of London from 1978 to 1988 and Professor of Translation at The Chinese University of Hong Kong from 1988 to 1997. He has written extensively on modern Chinese language and literature as well as on aspects of translation. Among his translations are The True Story of Lu Xun and Zhou Zuoren: Selected Essays.
Link to Editor biography:
http://www.cuhk.edu.hk/rct/30th/bio/dep.html